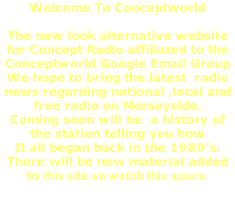 A new updated version of this blog is included here as well as the original.

We will be talking to about what the future holds.

Bringing you the a mix of the unique sound of the original Concept Radio together with some new programmes as well. Featured also will be some of the best of free radio on Merseyside

You can now listen here too!

This page provides information and links to many interesting websites to do with radio.

These also include both the Pirate and legal Stations.

Here you can listen in MP3 format to audio extracts taken from the original tapes of some of the many Pirate that used to operate in the Merseyside area.

These include some of their jingles and famous presenters too.

One of the great characters of Pirate Radio.He appeared on many stations back in the 1980’s

You can join the new Conceptworld Email Group to find out whats going on in Free Radio etc by clicking HERE. I will add your email address subject to approval